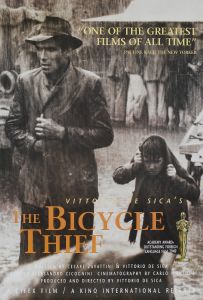 In post war Italy Antonio (Lamberto Maggiorani) is struggling to support his family and the offer of a job is a lifeline that could improve their position. The key requirement for the job is the use of a bicycle and when his is stolen he sets out with his son Bruno (Enzo Staiola) to find it.

Bicycle Thieves is a classic film that I intended to watch for quite some time. In 1950, two years after its release, Sight and Sound magazine voted it the greatest film of all time. In subsequent updates to their list it has slipped down but always stayed present, currently residing at number 33.

Shot in the Italian neorealist style the films premise is simple but affecting. The style called for films being shot on location, with non-professional actors and telling stories of working class people. What that means here is that we get to see stunning shots of post war Rome and an insight into the plight of the poor working class in the city.

The opening and closing moments of the film were the most powerful for me. When Antonio is initially offered a job he doesn’t currently have his bicycle as he has pawned it for food. His wife Maria (Lianella Carrell) decides they will pawn their bed linen to get the bicycle back and this scene for me was the moment that stayed with me for the duration of the film. Their desperation to receive enough money is sad enough, but then to see the recipient of the sheets climb a mountain of similarly pawned items to put it in its rightful place is a sight to behold. There are some very tense moments as well especially towards the end of the film when the loss of the bicycle becomes unbearable in terms of what it means for Antonio’s family.

Despite its 89 minute running time it does have a lull in the middle, as ultimately it is just a father and son looking for a bicycle. As a result of this it does make me feel like this is a film that needs to be seen, but not necessarily something I will come back to.

Throughout the course of the film I was constantly reminded of Ken Loach films because of its focus on economically challenged ordinary people. On searching for any connection afterwards I found a 2010 interview with The Guardian where Loach described it as the film that changed his life which really does show the power of the films reach.