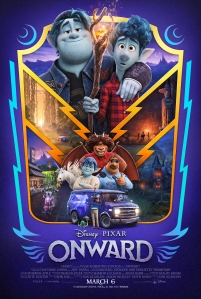 As Ian (Tom Holland) turns sixteen he is missing the father he never really knew more than ever. When his mother Laurel (Julia Louis-Dreyfus) produces a present for Ian and his older brother Barley (Chris Pratt) that their father left for them when they were both sixteen or older it sends them on a magical quest that will give them a chance to spend one day with him.

Pixar’s latest film is set in a world where fantasy meets every day. A world where unicorns, elves, manticores and sprites grew tired with the difficulty of magic and leaned into the simplicity of electricity and the automobile. The level of detail provided would suggest repeat viewings would reap rewards with the scale of what is on offer reminding me of the detail provided in Disney’s Zootropolis.

In terms of how successful the film is it feels very much like a film of two halves.

The first half felt very pedestrian and the voice acting of Holland and Pratt just did not seem to click. Pratt essentially feels like he is doing a Jack Black impersonation in a world that reminded me a great deal of the 2009 video game Brütal Legend starring Black whilst Holland just seems to be delivering the quintessential socially awkward teenager, something he admittedly is quite good at as Peter Parker.

The second half of the film on the other hand soars. As the brothers relationship is revealed and as their quest takes them more into magical fantasy the more it all slots together and the final fifteen minutes had me an emotional wreck. I am pretty confident someone was pealing onions in the screen I was in!

The animation is unsurprisingly superb and the message about dealing with bereavement and familial love is great, but it doesn’t join the realm of Pixar’s best despite the appearance of dragons and gelatinous cubes.