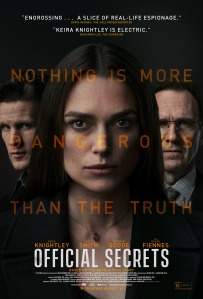 In 2003 the US and Britain were seeking approval for a war on Iraq from the U.N. At this time a memo was circulated at GCHQ requesting an intensification on surveillance of U.N. Delegates that Katherine Gunn (Keira Knightley), a translator within the agency considered to be a request for blackmail information. After leaking the document she was charged with a breach of the official secrets act and faced a court battle to keep her freedom.

Official Secrets is the type of film that grips you from the outset and appalls and fascinates you in equal measure at how the clandestine agencies and politicians of this world work. The film focuses on how the leak impacts Gunn and her husband’s life, the journalists who break the story and the legal team who defend her.

Performances are all round great. Knightley is currently one of the best English actresses working and puts in another fascinating performance. Ralph Fiennes steals the film with his principled lawyer and Matthew Goode, Matt Smith and Rhys Ifans all engage well as journalists trying to break the story.

The only misstep in an otherwise fascinating film is an attempt to inject some excitement with a manufactured race to the airport storyline towards the end.

A powerful fascinating story worth seeking out.