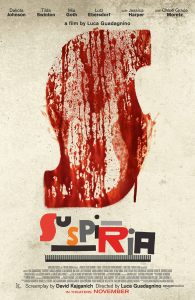 In an almost perpetually raining 1970’s Berlin, American dancer Susie Bannion (Dakota Johnson) arrives to audition for a dance troupe. After immediately impressing Madame Blanc (Tilda Swinton) she quickly finds herself dancing the lead role in the ritualistic piece called Volk (German for people). Could the delusions that missing dancer Patricia (Chloe Grace Moretz) told her doctor about the group being a coven of witches be true?

Suspiria is a remake of Dario Argento’s 1977 horror classic. Unfortunately this reviewer has not done his homework and watched the original feature beforehand. As such I can only tell you about the fascinating film that I saw rather than compare it with the original feature. Something that continues to be in my thoughts many hours after watching.

Stylistically Suspiria is fascinating. Set in Cold War Berlin the Wall is seen often and the oppressive nature of the city fits the tone of the film well. Radiohead front man Thom Yorke creating his first film score provides a hypnotic and dreamy surreal background to events. And this surreal sensation is backed up by the idea of modern dance performances being representative of magic spells. The film is also separated into chapters, informing us at the beginning that we will see 6 acts and an epilogue and separating these with title cards. The focus is also on this being a female led film. Obviously the suspected Coven and dance troupe are all women, but the only male role of the doctor is also played by Tilda Swinton in full make up and prosthesis.

As far as being labelled as a horror film this almost feels over the top. Evil is clearly present, but rather than a sense of fear there is more of a constant sense of needing to try to understand what is happening. In fact the blood and gore are in the main held back until the end when the pressure valve is well and truly released.

Is all of this style backed up with substance? I can definitely see this film having a love or hate reaction. To some it will be pretentious and hollow and with a running time of 152 minutes far too long. To others it will be intriguing and fascinating with many visual and aural flourishes. I think I find myself in the latter camp.

And for all those horror fans that thought Hereditary dialled the insanity up to 11 in its final act need to watch this!