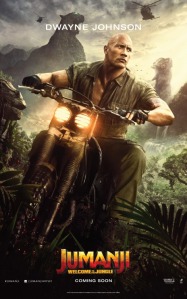 The sequel to the 1995 Robin Williams film starts with a prologue in 1996 which shows the magical board game evolve into a video game to ensnare another unsuspecting teen. Fast forward 20 years and 4 teenagers find themselves in a Breakfast Club style detention clearing out a basement room when they stumble upon the now archaic video game.

Once sucked into the game the teenagers find themselves transformed into their game counterparts. The superstar football player becomes a diminutive zoologist, the self conscious nerds become kick ass and attractive whilst the beautiful phone obsessed popular girl becomes a middle aged white guy! The set up is swift enough to get through some clunky moments and settle us into what is a really fun action romp.

Our gaming heroes are played by a roster of charismatic actors and they all get some very funny moments. Dwayne Johnson as Dr. Smolder Bravestone is great fun especially when the much shyer teenager occupying his character freaks out at events. Kevin Hart is very funny as zoologist Moose Finbar at odds with the loss of his athletic body. Karen Gillan as Ruby Roundhouse is panicked by her skimpy outfit and Jack Black as Professor Shelly Oberon probably gets the best lines given that he is actually a teenage girl.

The film rockets along once inside the jungle of Jumanji with some fun set pieces and is all round good fun.

2 thoughts on “Jumanji: Welcome to the Jungle”